(TAP) – The Maghreb Economic Forum (MEF) organised Thursday, in Tunis, a “networking event” dedicated to the progress of its project “3eshra” to promote the issue of gender equality in Tunisia. 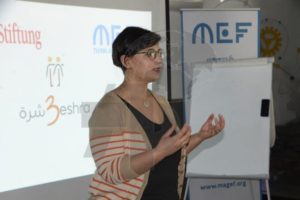 Launched in 2017 in partnership with the Robert Bosch Foundation Stiftung, this project proposes to set up a community of practice for gender equality in Tunisia that will facilitate the establishment of partnerships between the various stakeholders including organisations civil society, public institutions and local actors, “Samah Krichah, coordinator of this project with the MEF, told TAP.

It also proposes, according to her, to support this community of practice for gender equality by setting up an open-source platform facilitating communication and connection between the various actors.

“The role of this project is a facilitator role between the different actors,” she said.

She added that the MEF is currently working on five major themes, mainly the wage inequality of women in the private sector, the violence exerted on them and their participation in local governance.

Founded in 2011 to support the integration of the Maghreb and its economic and social development, the Maghreb Economic Forum (MEF) is a think-and-do tank focusing on four themes namely employment, education, leadership and gender.